Back To Lacontainer
You are here: Home / Containers and Packaging / How to Organize Your Life with Plastic Containers

LIFE magazine recently released photographs of the day Albert Einstein died. Kept hidden for decades per the request of his family, these photographs capture the last moments of one of the most brilliant humans that our society has ever known. While the entire article about the photographers journey taking these historic photos is a fantastic read, I am most taken back by the first few pictures that show the disorder of Einstein’s desk. Even the best of us struggle with basic organization. 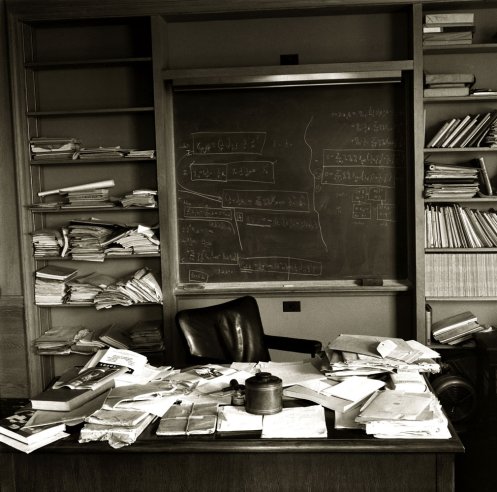 Unfortunately for Einstein, who died in April 1955, plastic storage containers were not yet an option until two years later in 1957 when polypropylene was commercially produced in large scale by the Italian firm Montecatini. The price of this versatile polymer became cheaper in the decades that followed allowing polypropylene plastic to become utilized in everyday products.

Going back to the modern day, it is still the case that most of our desks, office spaces, and work benches look something like this.

Messy, disorganized, and chaotic. Not unlike Einstein’s.

But there is no excuse when organizational tools have never been cheaper and more accessible in human history. Using a few small containers such as Flex-a-Tops, Statcons, and others, I was able to organize my desk in such a manner.

This is merely a sample of what is possible with over 180 sizes of small plastic storage containers. Those large boxes stacked on each other are FT-123s that are superior to premade storage bins as I am able to add or remove boxes whenever the need arises, each container is sturdy and can be reorganized depending on what the environment necessitates.

Perhaps if Einstein had lived into our time, aided by the utilization of cheap and strong polypropylene plastic containers, his final desk arrangement would have been as organized as he was intelligent.

What is BAS-PP? LA Container offers many types of ESD (ElectroStatic Discharge) plastic materials. One of them is BAS-PP and it stands for Blue Anti-Static Polypropylene. It is an electrostatic dissipative material that will dissipate the static buildup that is formed on the surface of the container. The material is slightly conductive with a surface …

We are LA Container®; A family owned plastic container manufacturing company located in beautiful Southern California. Opened in 1985, we have been proudly manufacturing our hinged lid plastic containers in the USA for over 35 years. We take great pride in our American made plastic products and want our customers to know more about us …

LAContainer is proud to announce the launch of a brand-new website for all of the fishing and outdoor enthusiasts. Meihotacklebox.com offers customers high quality plastic tackle boxes, adjustable compartment containers, and other fishing supply storage cases and accessories in one convenient shopping site.

We are… We are the manufacturer of the original, USA made, LA Cons plastic container line. When our company began in 1984, we pushed to bring you the lowest prices for the highest quality container. While our competitors increased prices, we fought to keep the same containers affordable for your company and brought in more …

Keep Things Secure with Small Plastic Containers with Attached Lids There is nothing better than knowing something is for sure. Whether it be knowing you’ll make it to work on time or having security in your relationship when something is a fact in life it feels safe and secure. That’s how it feels when you …

Inspiration is an essential characteristic of an artist. The artist comes and goes with thought, action, and execution. They are constantly analyzing and reanalyzing their creative process. Artists are inspired by their surroundings and the elements around them. They are inspired by emotion and commotion. Without the core of inspiration, art would be artless. Art …

Since childhood, we are told to reduce, reuse, and recycle. Over and over, it is engrained in our minds to be an environmentally conscious person and to be the caretakers of the world we live in. Today, there are so many people aware of the dangers of hurting the environment and a numerous amount of …

Why should you have a first-aid kit? Boo-boos suck. No one wants to fall down and have their leg scratched and bleeding. Nothing is less fun than being the one who has to deal with a cut in public and having nothing to take care of it with. It is important to be ready to …